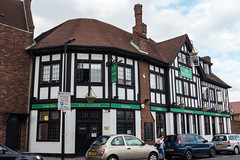 Pub in Tottenham, quite close to Bruce Grove Station.

It's a large pub, with several distinct areas. The main room, which is the only one with direct access to the bar, has normal chairs and tables plus a few leather sofas. Exposed brickwork adds interest. A side room holds a pool table, and another, larger side room is available for private bookings. There's a large, part-covered decking beer garden out the back, which unusually includes a couple of statues among the greenery, and on our visit had the added bonus of a bouncy castle photo.

Kake visited on a Thursday afternoon in September 2016. There were a couple of other customers when I arrived just after their opening time of 4pm, and a couple more turned up during the half hour I was there. Dance music was playing, fairly loud.

Three of the six handpumps were on, all clipped for locally-brewed Redemption ales: Hopspur, Fellowship, and Big Chief. A pint of lime and soda was £1.50.

Food is served: European small and large plates, burgers, and Sunday roasts. They have a children's menu both for regular days and for Sundays.

According to a sign seen in September 2016, there's a quiz every other Wednesday. According to the 2017 Good Beer Guide, there's live music and DJs at the weekend.

Kake's verdict: I'd like to come back for a longer visit.

Accessibility: A ramp to get in (looks like a portable one but seems to be put in place routinely rather than only on request). A step between the main area and the function room. No step to the garden, though there is a raised threshold. No steps to the ladies, but access is quite narrow.