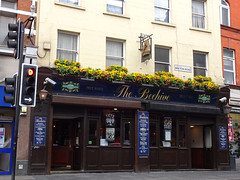 Food served all day, starting with breakfast from 9am. Has Old Rosie.

Bob visited on a Tuesday afternoon in October 2008. It was full of regulars and seemed like a typical Wetherspoons. A pint of Ghost Buster was £1.99.

Accessibility: No steps to get in, but toilets are up several steps.