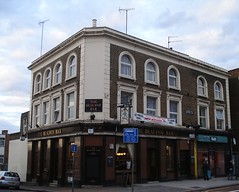 Now closed; was a pub on Lavender Hill in Battersea. According to Pubs Galore, it closed in July 2012 and is due to be converted to residential use. As of February 2013, however, it remains vacant (see photos: 1, 2, 3, 4.

Pub on Lavender Hill in Battersea.

They advertise live music and DJs, and there's a built-in DJ booth to one side. Much of the space is bare of tables and chairs, presumably for dancing purposes. The dancefloor/standing area is adorned with a couple of pillars decorated to resemble palm trees.

Kake visited on a Monday early evening in March 2010. There are no handpumps for real ale, so I went for Strongbow; the friendly barmaid persuaded me to upgrade from a half (£1.50) to a pint at the Happy Hour price of £2. (Happy Hour is 5pm-7pm Mon-Thu.)

A couple of TVs were showing WWE wrestling, with the sound up quite loud. There were quite a few other customers when I arrived around 6pm, and conversation was loud and animated. I didn't have trouble finding a seat, though. The heating was turned up quite high, to the point where I found it a bit too warm (but then I'm one of those strange people who likes to have the window open year-round, so it'd probably be OK for most people).

They do Caribbean food, but we're not sure what times. As of March 2010, they were advertising a special fish menu on Fridays; the regular menu had mains (e.g. jerk pork, curry goat) priced at £6-7 and sides priced from 75p for hard dough bread up to £2 for rice and peas.

Accessibility: One fairly low step up to get in. Some of the seating is on a dais, up two more steps. There's a step down to the toilets.