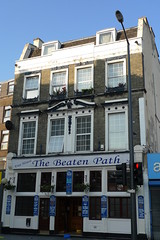 The Beaten Path was a pub on Walworth Road, north of East Street. It closed in early 2011 due to the retirement of the freeholders.

According to the 13 January issue of local paper Southwark News, the ground floor of the pub is due to be converted into a mini-supermarket.

secretlondon visited one early evening in September 2008. They had four hand pumps but none of them were working and two didn't have labels on. I had a John Smith's Extra Smooth (£1.25/half).

The back of the pub was laid out for food but there were no signs when the food is on.

There was background music (Magic radio) and a TV with the sound off.

Accessibility: One step to get in and no extra steps to get to the toilet.