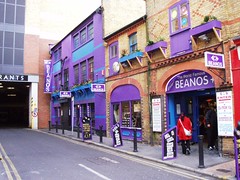 This record shop in Croydon had already been threatened with closure in late-2006, but was able to keep going in a more limited capacity, with its stock spread over just one floor rather than the original three.

It then closed for good, and was replaced by Stuff undercover market. Stuff also closed, and as of 2013 the premises are occupied by Beanies children's cafe.

Excellent second-hand record shop in Croydon which has been around since 1975. It occupies a very purple building, easily spotted from George Street.

It has an extensive stock over most genres, but especially pop and classic rock & roll. Vinyl plays a large part in its collections, though it also stocks plenty of CDs.

On a visit in March 2008, a large proportion of their 7" vinyl was on sale for £1, including some good items. More collectable items are still priced accordingly, though these can seem quite steep compared with comparable prices on internet auction sites, and even compared to central London stores like Music & Video Exchange.