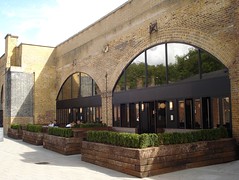 The Beagle was a bar and restaurant next door to Hoxton Overground station. It closed down around the start of 2018. According to The Caterer, there was no warning of this, and when we went past in early February 2018 it certainly seemed to have been closed for a while. As of September 2018, the premises are occupied by a branch of the Brewhouse & Kitchen chain.

Situated immediately next door to Hoxton Overground station, the Beagle is certainly easy to find. The restaurant serves seasonal British food (the menu changes daily) and has an interesting cocktail list.

The roof is formed from two large railway arches, neatly dividing the place into a bar area photo and a restaurant area. There is also outside seating in front of the two halves, again split between bar and sit-down dining. The section of road is pedestrianised and it's quite a pleasant spot in the sunshine, with the tall trees of the Geffrye Museum looming just over the wall.

On a Wednesday evening visit in July 2013, Kake, Sarah and Kat met in the bar area for an aperitif — it was reasonably busy at 6.30pm, but most of the punters were outside enjoying the sunshine. Music was playing, not too loud. The friendly bartender was happy to give some very generous tasters of the beers on offer; Kake chose a pint of Redemption Hophead (£3.80).

Kat ordered a Lady Thyme cocktail, but with the absence of any lemon or thyme, we weren't convinced that was what actually turned up. However it was extremely tasty (sweet, pink and frothy) and it didn't appear on the bill later on, so overall we couldn't complain. The other cocktails we tried (an Iberian Negroni, a Quince Sour photo and a Santiago Cooler, all £8.50) were also very good.

We were shown to an outside table which unfortunately was quite cramped — the waiting staff spilled things over our table twice while squeezing past us. The seating was also quite uncomfortable (hard, blocky wooden benches and plastic stools). The staff were very attentive, just to the point of being intrusive. A basket of (rather good) bread was provided straight away; a container of chilled tap water was brought when we asked, and refilled during our meal.

Starters were reasonably priced but varied in quality and quantity: peas with curds (£6.50) was literally just that, and the portion was quite small. Conversely there was almost too much gazpacho soup (£5.50) photo, though it was tasty enough. We all agreed that the courgettes with spenwood (£6.50) photo was the best starter, substantial, perfectly cooked and not too oily.

The main courses were disappointing: crab tagliolini (£16.50) photo was fine, but not particularly exciting and probably not much better than you'd find in an upmarket pub. The roast pork with crackling and borlotti beans (£17) photo was too enormous to finish; the pork itself was juicy and well cooked but the crackling was sadly impenetrable with either knife or teeth, and the borlotti beans had unpleasantly tough skins.

Kat's dessert of meringue and apricots (£5.50) photo was enjoyable (and again, massive), but on a hot day it would have worked much better with ice cream or sorbet, instead of double cream.

The bill came to £142 for three people, including service, three cocktails and a bottle of Marsanne-Roussane (£27). There was a bit of confusion regarding our bar tab and we were brought the wrong bill at first, which didn't help our overall impression of the staff much.

Kat's verdict: I'd come back for cocktails if I was in the area, and maybe try the bar snacks, but would definitely give the restaurant a miss next time.

Kake's verdict: I agree with Kat re coming back for cocktails and bar snacks. I might also give the restaurant another chance if I caught it at a non-busy time; I found the service issues more troubling than the food.

Accessibility: Step-free throughout, including to the bar, restaurant area, and toilets.