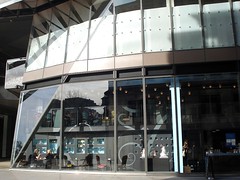 Cafe and teashop in the One New Change development near St Paul's, despite the name (which is due to the other branch of Bea's, the original one, being located in Bloomsbury). The entrance is on Watling Street.

Although the focus is on cakes and other such sweet items, they do some savoury food at lunchtimes. They are also licensed; wine is available, and their afternoon tea has a champagne option. Order at the counter as you go in, then find a seat and they'll bring your food and drinks over to you; pay on the way out.

There's seating for half a dozen people on the ground floor, but the majority of the seating is on the first floor, in low booths lined with tapestry cushions in a well-coordinated and interesting selection of colours; those shades that it's never clear whether to call olive green or mustard yellow, dark turquoise or light blue, burgundy or dark fuchsia. Teapot-shaped lamps hang from the ceiling up here, echoing the theme. The full-height glass frontage gives a not particularly exciting view into the offices opposite.

Kake has visited (or attempted to visit) three times now, all on weekday evenings. The first time it was closed entirely due to being booked out for a private party, and the third time the upstairs floor (where the majority of the seating is) was booked out, though luckily the weather was good so we could sit outside. So it's probably worth phoning ahead (or making a Plan B) if you want to take a large group.

A cup of hot chocolate in May 2011 was quite frothy, and more milky than chocolatey. Unfortunately, despite being served in a very chunky cup, it went cold very quickly. It was unsweetened, which I prefer; for those of a different persuasion, white and brown sugar is provided in neat little pig-shaped sugar bowls on the tables. A glass of vanilla and raspberry iced tea in June 2011 was pretty tasty, and not too sweet, though the serving was a lot smaller than I'd expected.

The food options include cakes, cupcakes, brownies, cheesecakes, and macaroons. The flavours of these change frequently; in May 2011 the macaroons of the day were mango and mojito (£1 each). A piece of almond and orange cake (gluten-free) in May 2011 was a little soggy in texture, though flavourful enough; the icing was way too sweet for Kake's taste, but easily discarded. A slice of key lime pie in June 2011 was very nicely limey.