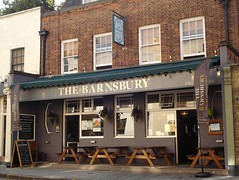 Now closed; was a pub in Barnsbury.

As of August 2014 the premises are occupied by the Hop & Berry, a pub specialising in craft beer from London breweries. This is run by different people from the Barnsbury, and is due to open on Saturday 30 August.

The information below is retained for people who want to know what it was like as the Barnsbury.

Pub in Barnsbury, in the Good Beer Guide.

It's run by the same people (the Three Boozers pub company) as the Duke Of Hamilton in Hampstead.

Inside, it's light and bright, with a hardwood floor and an uncluttered feel. Ales, ciders, and lagers are listed on a board to the right of the bar, and a collection of board games sits on a shelf. There's another room to the rear (with tables already set with cutlery and menus on our September 2012 visit). Several picnic benches are situated on a covered decking area at the front, slightly raised from the street.

Kake visited on a Thursday afternoon in September 2012. There were four real ales on: Nethergate Lord Of The Rings (£3.70/pint), London Pride, Moorhouse Blond Witch, and Dark Star Hophead. A generous discount of 95p on the price of my pint was given on production of my CAMRA member card.

Food is served, provided by Boydens Kitchen; see photo of menu as of September 2012. On our weekday visit in September 2012, a board outside advertised food from 6:30pm to 10pm; it wasn't clear whether these are the food times every day.

Accessibility: A ramp to get in. Once you're in, it's step-free to the bar, ladies' (not sure about gents'), and all the interior seating. There's also level access to a couple of the exterior picnic benches, though no room to pull up a wheelchair. A cubicle in the ladies' has a pull-down baby-changing table; again, though, not sure if this is also the case in the gents'.