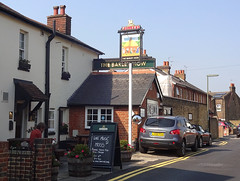 The interior is a succession of small seating spaces wrapping around the central bar. This finally leads to a barn-roofed dining area (helpfully labelled "The Barn" on a ceiling beam) which gives onto a large grassy beer garden with seating under large parasols.

The decor is traditional and well-maintained. Flooring is a mix of wood and stone flagging, partially covered by large, worn patterned rugs. Leaded and stained glass adds interest photo.

On Kake's Thursday lunchtime visit in September 2016, there were a dozen or so people in at 1pm, divided between the air-conditioned interior and the sunny garden. Fairly interesting music was playing, not too loud.

The pub does seem to suffer from an under-ventilated kitchen, though this has improved over the years. In July 2009, bob could see the smoking oil from the deep fat fryers, and it was almost unbearably hot inside the pub, not to mention smelly. In September 2016, they had the air conditioning on, and although Kake could smell the frying oil from the kitchen, it wasn't overwhelming.

According to their website as of September 2016, food is served noon-3pm and 5pm-9pm Mon-Fri, noon-9pm Sat, and noon-6pm Sun. Photos of menu as of that month: main menu, sandwiches and light lunches, specials.

In July 2009, the fish and chips (£7.65) was quite good, with a crisp batter and well-cooked fish. The chips could have been slightly crisper but were fine. The burger was fine, as well.

Accessibility: Two small steps to get in. Level access to seating, bar, and accessible toilet. No steps to other toilets either, but access is quite narrow. Two or three steps to the beer garden.