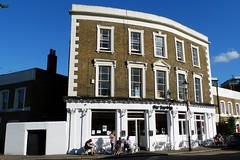 The Baring was a pub in Hoxton. It has now closed and been replaced by a "wine bar and gin parlour" called the Poet.

The decor is non-traditional, featuring large windows, pale cream walls with various prints and paintings of pop culture icons (The Beatles, scenes from Pulp Fiction), a bare-boarded floor, and mismatched wooden chairs and tables. Candles sit in wax-dribbled wine bottles on the tables, and a fairly substantial collection of board games is stacked against one wall. There are a couple of sofas too, one near the door and the other round the corner in a little nook on a dais. Outside seating is provided by a few tables out the front of the pub, and a small beer garden out the back.

Kake visited on a Sunday early evening in September 2011. There were several people in, mostly sat at the bar; there were plenty of free tables. A couple of bicycles were distributed around the room, apparently belonging to customers. Music was playing, quite loudly — Primal Scream, Michael Jackson, Iggy Pop. A flatscreen was showing tennis with the sound off.

All four handpumps were on, offering Spitfire, Landlord, Woodforde Wherry, Harvey's Sussex Best (the latter two being guests, according to a sign on the bar). A pint of lime and soda was £1.60.

According to a menu seen in the pub in September 2011 photo, food is served noon-10pm Mon-Fri and noon-9pm Sat-Sun, including brunch menu photo between noon and 3pm at weekends. A sign seen on the same visit advertised a quiz and curry night every Thursday from 8:30pm, with quiz entry and a curry (Thai, Indian or Caribbean, available from 6pm) costing £5 and quiz entry alone costing £1.

According to the Fancyapint review linked below, there's another room upstairs with a pool table, dartboard, and table football. Finally, according to the Baring website as of September 2011, there's free wifi.

Accessibility: A small step to get at both entrances, only an inch or so high. Bigger steps to the beer garden. Step-free to the ladies' once you're in, not sure about the gents'