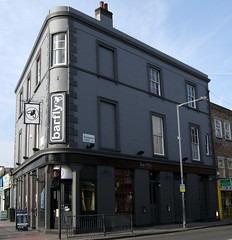 Barfly was a bar and venue near Chalk Farm Station. It closed down in June 2016. The premises were later occupied by another bar/venue called The Camden Assembly.

A bar and venue near Chalk Farm Station, which in 2000 moved from its original home in a more remote venue called The Falcon into this former pub building (previously The Monarch).

The main venue itself is upstairs, in a small room with creaky floorboards that probably wouldn't comfortably hold more than about 80-100 though they always seem to cram more in somehow. It has been the site of small gig by many famous bands, some of whom play here early in their careers, others of whom play 'secret' shows under assumed names to warm up for bigger gigs elsewhere, such as the prominent Roundhouse venue just nearby. Gigs taking place upstairs are generally ticketed, and these are checked in the hallway leading to the stairs, where there can also be found a small cloakroom.

There is also a downstairs bar, where bands occasionally perform as well. The drinks on offer throughout the venue are fairly minimal, with two Gaymers ciders (regular and Pear), Tuborg and Carlsberg lager, and Guinness on draught. There are a few other options for bottled beer (Budvar, San Miguel, Newcastle Brown Ale and the like).

Those who enjoy the indie and rock music scene will find plenty of bands to like here, though the venue naturally feels cramped. However, the atmosphere is much of a piece with the other bars and pubs along this busy and popular stretch of road near the Camden Lock markets.