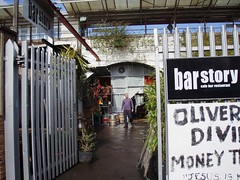 Popular bar under the platforms of Peckham Rye Station. Entrance is generally direct into their front yard from Blenheim Grove, except at busy periods (weekend evenings for example), when entry is via the gate under the railway lines a few doors to the east, where they are better able to perform bag checks.

The bar offers a fairly limited draught beer range (there are some Meantime beers on offer including London Pale Ale) and several bootles, but they do food at least in the evenings and during the day weekends, including Sunday brunch. They also do cocktails at £7 each, which are generally excellent.

There is a large outdoor seating area in the front with a small amount of foliage for shelter, and more seating in the closed-off service lane out the back. Beyond that space, at the back of the bar under another arch opposite, they have a small gallery space called the Sassoon Gallery, which has a regularly changing line-up of artists exhibiting.

As of 2015, they advertise a pizza night on Tuesdays (two for £10), and there's a Sunday roast for £7 from noon-late. Happy hour is 6-7pm every day, offering two of the same cocktail for £7, though the popularity of this offer means they limit the number they'll make for each customer.

Ewan has visited at times when it's fairly relaxed, as well as times when the crowds have been spilling out both ends (Saturday night for example). There's generally enough space that something will open up fairly quickly as people move around. Music is often played quite loudly inside the bar, but can be escaped for those willing to sit outside, and even inside is not too deafening thanks to the doors open at either end.