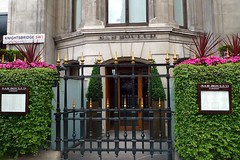 A bar and bistro in the Mandarin Oriental Hyde Park hotel. It is the second establishment of the same name to be opened by Michelin-starred chef Daniel Boulud (the first is in New York City). Heston Blumenthal's Dinner can be found in the same hotel.

The bar/restaurant is accessible both via the hotel and the street. The space is low-ceilinged and dimly-lit, much like many hotel bars. The clientele were a mixture of hotel guests, businessmen, and casual diners. Staff were attentive but not overbearing.

Laura and Matt visited in October 2011 for dinner. Reservations are recommended for dinner — we had made one for 7pm, but arrived just after 6pm to sample the bar and cocktails. Laura started with a Belle Poire cocktail (£12.50), which was delicious and sherbety. Matt chose a BrewDog IPA (£4.75).

At 7pm we were taken to our table, and presented with complimentary baguette, olive bread and ciabatta slices, which were all very fresh and high-quality. For dinner, Laura ordered a Piggie Burger (£12.25), Matt a Frenchie burger (£12.25), and two portions of French fries (£3.50 each). We both thought the burgers were the best we'd ever eaten — less like a burger and more like steak haché served in a brioche bun. The fries were also excellent — crisp and perfectly seasoned.

For dessert, Laura chose a gateau Basque (cake served with brandied cherries and vanilla ice-cream, £6.50), while Matt had two scoops of ice-cream (£2.75 each) — caramel and coffee. Matt thought the ginger biscuits that came with the ice-cream were amazing. Laura enjoyed the gateau — a sort of posh custard tart.

Laura's verdict: With wine and tip, the bill came to £93 — expensive for burgers and fries, but we reckoned it was worth it.

Accessibility: if you use the entrance on Knightsbridge (as opposed to going in via the hotel) the entire floor is step-free. There is step-free access to the toilets.