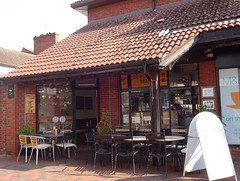 Tea shop and cafe located near one of the entrances to the Ashley Centre, Epsom's main indoor shopping centre.

The premises are divided into two sides; one for takeaway orders plus sales of loose tea and teaware, and the other for eat-in. Both sides are tiny; on the eat-in side there's internal seating for just six people at normal-height tables plus an extra five on high stools at a narrow shelf. Half a dozen small tables on the pedestrian walkway outside contain the overflow.

Despite the limitations of the space, they've managed to fit in sufficient cooking equipment to finish off dishes freshly to order, albeit from pre-prepared components. The menu is focused on Chinese and Malaysian hot dishes such as sweet and sour king prawns, penang chicken, and rendang. All dishes are available with noodles, white rice, or brown rice. They also have a couple of "low carb" options which omit the noodles/rice and include extra veg or extra chicken instead, and they also do steamed Chinese filled buns (bao/包子).

Kake visited on a Thursday lunchtime in September 2016. It was quite busy, with all the tables taken by 12:30pm and a steady stream of takeaway customers. No music was playing.

I tried the fish rendang with brown rice (£5.50) photo. The fish was fine; not overcooked and plenty of it. The sauce was fine too, with a nicely savoury flavour and hints of coconut and chilli, and the vegetables — carrots, beansprouts, and white and green cabbage — were as good as could be expected given the kitchen equipment available. (The stray noodle I found in their midst was also likely due to the tiny kitchen space.) However, the spring onions on top were cut much too large, and aggressively overpowered the rest of the dish, and the brown rice was terrible: mushy, overcooked, and stodgy.

Kake's verdict: I'd come back, as I'd like to try their teas if nothing else, but I'd avoid the brown rice.

Accessibility: No step to get in, just a ridge. Very limited space inside; it would be hard to get a wheelchair in. No customer toilets, though there are likely some in the main part of the Ashley Centre.