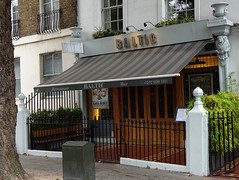 Entrance is via the (reasonably large) bar area, which is stylishly cosy with dark wood plus cushions. The restaurant area is towards the back and is much airier and lighter, with white walls and a high skylighted ceiling. There's a small amount of outside seating, though we don't know if you can have food served out there. They frequently host various arty events, and art is also exhibited on the walls of both bar and restaurant.

Kake first visited on a Monday lunchtime in July 2008. Although I got there fairly late (around 2:30pm, just half an hour before lunch service ended) there were a couple of other parties still there finishing their meals. I asked for a table for one, and was seated in a little tucked away corner on a banquette. Pickles, beetroot-horseradish spread, and some decent butter arrived shortly after I was seated, and bread was also offered; I chose dark rye. Tap water was provided willingly, in a jug with ice cubes which was left on the table after pouring.

I started with chilled beetroot soup (£4.50); it was refreshing without being insubstantial, and a generous portion with plenty of crisp vegetables and fresh dill photo. I followed this with blinis with a selection of toppings — smoked salmon, salmon eggs, pickled herring, mushroom "caviar", and aubergine "caviar" photo. I had the smaller portion at £7, which was plenty for me after the soup; a larger portion is available at £11 if you prefer.

Service was friendly and became even friendlier as they saw how enthusiastic I was about the food. I asked for a menu so I could show bob, and they happily brought me two copies and chatted about the various dishes, explaining that the menu changes often, with only staples such as barszcz (borscht), pierogi, and blinis remaining unchanged.

On a return visit in March 2010, Kake tried the set lunch menu (£14.50 for two courses). My starter of marinated aubergine and main of pork stew with dumplings were both pretty good, with a nice texture to the dumplings and a good tenderness to the meat. My companion's main of lamb meatballs was only about half the size of my own main, though, and would have benefited from a side dish — a rather odd mismatch. Happily, even though we had the set lunch rather than going a la carte, we were given the same complimentary bread, pickles, and spreads that I got last time, and there was no problem bringing us a jug of tap water.

Bec and Steve visited in November 2015. They still bring out pickles and a variety of breads. The a la carte menu also remains much the same. Aubergine caviar blini was tasty but a smallish portion; adding pierogi (potato, cheese and spring onion) dumplings helped pad out the meal. Steve enjoyed his lamb chops and side salad. The service was friendly and attentive throughout.

Kake's verdict: I've been twice now, and would happily come back again, whether in company or on my own.

Bec's verdict: A pleasant dining experience overall but given the small variety of vegetarian food, I would probably pass it up again in favour of somewhere with more options, however Steve rated it very highly.

Accessibility: Step-free throughout, and there's an accessible toilet too.