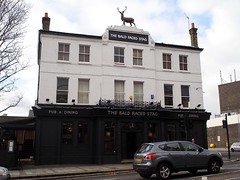 A very capacious gastropub just along the road from East Finchley Station.

Previously owned by the Realpubs chain, it was acquired by Greene King in April 2011, along with the rest of the chain. A visit since then confirms that very little has changed in the Realpubs "concept".

Inside, there are plenty of tables and a separate dining area. There's also a nice little hideaway room to the right of the bar, with a curtain to separate it from the main area; a sign suggested that this area can be booked. Seating is generally leather and plush, with several sofas scattered around; the floor is hardwood; and the lighting is chandelier-and-wall-lamp style. There's a good beer garden as well.

They have three handpumps, which as of March 2009 always host guest ales rather than regulars. Two were on offer during Kake's March 2009 visit; Holdens Springheeled Jack (£1.60/half) and Deuchars IPA. The barman gave me a very generous taster of the former even though I was only ordering a half, full marks for customer service! On a September 2012 visit, the cask ales included one from Itchen Valley brewery, perfectly well-kept. In October 2007 Ewan also noted Addlestones cider, Hoegaarden, Leffe, Staropramen, and the standard range of lagers on tap, with a good selection of bottled beers as well.

A return visit in September 2012 revealed little change to the overall feel of the menu, or the pricing, and on a Saturday lunchtime they also had breakfast options (served until 2pm), so Ewan had a full English breakfast (£9.50) photo, which had good quality ingredients, including excellent black pudding. Eggs were offered in any style (I went for poached, which were cooked properly, with a runny centre), and if the toast was a little bit too chunky and rigid (and I had to ask for butter), it was still a tasty brunch. Kerry had a 28-day aged rump steak (£12), good value for the general quality and cooked rare as requested, served with some solidly chunky chips.