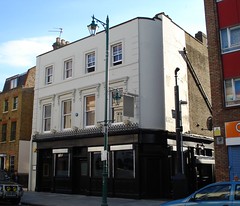 Bacchus was a "modernist" restaurant in Hoxton. It closed for good on Saturday 9 August 2008. The chef, Nuno Mendes, has since opened a new restaurant called Viajante in Bethnal Green.

The Hoxton Street building was transformed into Bacchus Pub and Kitchen, which opened on Monday 11 August 2008 as "a modern-day local boozer", and was reviewed by Dos Hermanos, by Food And Drink In London, and by Cheese And Biscuits. Unfortunately this only lasted a few months; according to eGullet, the Bacchus people (Philip and Nuno) have now sold the place to someone else.

The information below is retained for those who want to know what the Hoxton Street restaurant used to be like.

Relatively inexpensive “modernist” restaurant in North London, billing itself as “fine dining in trainers”. It's never felt extremely casual on any of our visits so far, but it's been fairly quiet on all of them (one Tuesday and two Wednesdays) so we don't know what the ambience is like when it's busier. According to a friend of Bob's, it's never all that busy, so you could probably turn up without a booking most nights.

The menu changes every month, with some dishes being retained and others changing. They can cater for vegetarians and vegans (we've tested this, and they did well).

Kake, Bob, and doop have visited three times now (July 2007, October 2007, July 2008) and liked it each time. On our first visit, there was perhaps a little too much reliance on the "crunchy powder" meme, but this has got better, with only a single (and appropriate) appearance on our latest visit. The different courses are well-balanced and interesting; and every time we've been, there's been disagreement on which bits we liked and which we didn't, which suggests that most people will find at least something to like here.

Kake, doop, and Juliet tried the vegan option on our October 2007 visit, with Bob sticking to the normal menu, so we got a chance to compare. Although we gave them a week's notice of this, the chef decided to wing it rather than planning us a menu in advance, and he did very well too. Most of the vegan dishes were adaptations of the non-vegan ones, meaning that we were all eating roughly the same thing — handy in terms of discussing the dishes! The non-vegan components were substituted with other items from elsewhere in the menu, leading to a small panic in the kitchen when the chef realised he'd already given us all the components of the final dessert. I'm not convinced we were really meant to take the resulting "Stella Artois foam" seriously, but then food doesn't have to always be serious.

Our July 2008 visit was a birthday dinner with fourteen of us in total; they asked that we all choose the same number of courses, which is fair enough. They coped pretty well with the large group, with only one or two service hiccups, and the food was good as always. Kake's only disappointment was the amaretto sour that I ordered on arrival; it was too sweet and no sourness was detectable.

The Bacchus website has its own set of forums, and a staff member has been known to post on the eGullet thread on Bacchus.

Accessibility: Step-free throughout, but didn't notice whether they have an accessible toilet.

(Apparently some people have had trouble finding the entrance; it's on the left hand side as you look at the photo above, which is taken from slightly to the north of the restaurant.)