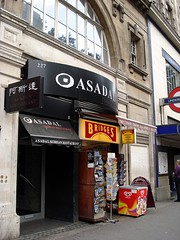 Note: A report on Twitter states that as of November 2021 Asadal has closed down, but we haven't verified this, and it's not clear what the report is based on.