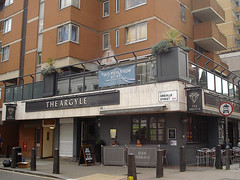 The decor is fairly standard mid-range chain pub. There's some seating outside, looking onto Leather Lane and its market, and there's also a first-floor "roof terrace".

Kake visited on a Wednesday lunchtime in September 2014. There were several people in when I arrived a little before noon, some of them sitting outside. By 12:30 there were quite a lot of people in, and some of them seemed to be regulars. Music was playing, somewhat cheesy, but not too loud.

Three of the four handpumps were on, offering London Fields Love Not War, Sharps Doom Bar, and London Pride. Drinks on keg fonts included Whitstable Bay Blonde, Estrella Damm, and Peroni. A pint of lime and soda was £1.60.

According to the 2015 Good Beer Guide, food is served until 9pm daily (except Sundays, when the pub is shut).

In September 2014, Kake's goat cheese and sweet balsamic onion pie (£8.45 including chips or mash and veg or salad) photo was OK. The pie was a true pie (pastry all the way around), but rather too sweet for a savoury dish, and a bit carb-heavy due to the inclusion of couscous; also, the spinach was disappointingly non-prominent. The veg were fine; neither undercooked nor overcooked.

Accessibility: A step to get in. Much of the seating is raised up a couple of steps, but there are a couple of tables on the same level as the bar, and an accessible toilet also on this level. Other toilets are in the basement, down a flight of stairs with a sturdy handrail all the way down. The cubicles in the ladies are a very tight squeeze, almost to the point of having to climb over the toilet to get out.