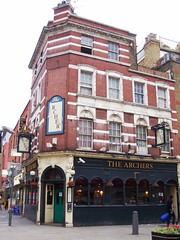 The Archers was a traditional boozer at the end of Brick Lane, near Aldgate East Station. It has now closed and been replaced by a "pub and hotel" called The Buxton.