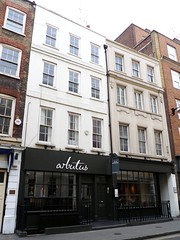 Arbutus was a Michelin-starred restaurant on Frith Street in Soho. It closed down in July 2016.

The menu offers modern European food, with about six options for each of the starters, mains and desserts (as well as a selection of cheeses for £3 each, to build one's own cheese board). Notably, they'll serve any wine on the menu as a 250ml carafe, which is handy if you're dining on your own, or you want to try out an expensive wine you're not sure you'll like (though some have noted that the markups are generally a little higher than normal, making this somewhat less of a bargain if you plan to drink a lot). There is a vegetarian option for both starters and mains, and they'll even adapt the pre-theatre set menu (£19 for three courses, slightly smaller than the a la carte portions, and served until 7pm), which otherwise usually has two meat-based choices.

On a visit in May 2007, Kat started with lovely seasonal asparagus and fried duck egg that arrived in a frying pan! The main course of lamb, sweetbreads and artichoke was absolutely wonderful, as was the rabbit wrapped in bacon - heartily recommended for any carnivore. Puddings were lovely too.

The staff were very efficient, friendly and knowledgeable, choosing appropriate wines for us. We booked two weeks in advance in order to get a 7:30pm table but a couple of days' notice would have sufficed for an early or late seating.

Three courses plus bread, water, wine and service all came to under £50/head, and well worth it! Kat will definitely return.

Visiting in June 2008, Ewan can confirm that the food was indeed excellent, and they did not demur when I asked to have a vegetarian course on the set menu, instead of the given options (their specific reply was that you were welcome to mix and match between the menus: the difference between the two is just that the set menu portions are slightly smaller, but still perfectly filling!). A risotto of broad beans and vegetables was delicious, not too stodgy. The starter of mushroom soup was pleasingly rich and creamy and poured with a flourish after all the plates had arrived (the plate initially came with only a dab of cream and some herbs in the middle, which led to raised eyebrows). Pudding of strawberry sorbet was exactly as billed, though really it's the savoury courses which are the highlight at Arbutus.

Booking for eight people during pre-theatre was possible (eight is their maximum booking size), and was done a week beforehand. They intimated that the bookings were already getting full by that point. They also ask for credit card details for bookings of over six people (with a £20 late cancellation fee, though that's pretty standard for this level of restaurant).

James visited here on an evening with a friend on 1st July 2008 and found the food to be exquisite. Service was abominable however, with ridiculous waits for everything, even to have our order taken. This was explained as a party of 60 having turned up without booking earlier, although given the restaurant would struggle to fit many more than 60, this seems unlikely. I wouldn't let this experience put me off coming back and the food truly was excellent. The bill came to about £112 for two excluding the service charge, which I declined to pay.