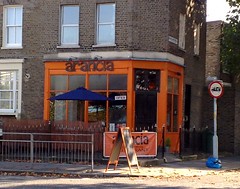 Arancia was a small Italian restaurant on Southwark Park Road in Bermondsey. Sadly, after over a decade of operation, Arancia closed for good at the end of March 2009.

As of March 2011, the premises are still empty and unused.

Small Italian restaurant on Southwark Park Road in Bermondsey. It's very cosy inside, and also quite orange photo.

Kake and doop visited on a Thursday evening in March 2009. We'd managed to book a table with only an hour's notice, and were glad we did, since shortly after we arrived at 8pm the place was full.

Kake started with pesce en saor (cold marinaded sardines and mackerel with sweet and sour onions, rocket salad, and a thick triangle of toast, £6.50) photo; this was tasty enough, though it was a little disconcerting not being able to see much of what I was actually eating, due to the low light levels. doop had the minestrone (£3.50), which he thought was "so-so", although the bread that came with it was very tasty.

For mains, Kake had the melanzane ripiene (aubergine shells stuffed with cubed potatoes, £12) photo; this was less successful, with the aubergine completely dominated by the potato, and the potato cubes themselves ranging in doneness from deliciously soft to slightly too al dente. doop was much more pleased with his braised rabbit (£13.75), which he described as "the rabbitiest rabbit I can remember eating; so rabbity I could smell it before they set it down at the table".

Service was friendly enough, though seemingly a little stretched by the number of diners present - all contact was very swift, and we had to ask twice to get tap water (which was charmingly presented in a chilled bottle, the neck of which bore a tag proclaiming its origin as "Bermondsey Spa", with a line drawing of a tap on the other side for those who didn't get the joke).

Accessibility: A step up to get onto the outside patio, and another to get into the restaurant. Quite cramped inside.