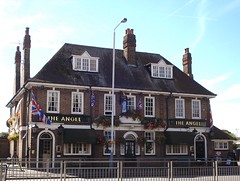 The Angel was a Fuller's pub in Hayes. According to the Dec 2018/Jan 2019 London Drinker, Fuller's have sold it to a company called Eastway Estates who in turn have put it up for auction. It's unclear whether it will ever reopen as a pub.

The pub sits at the side of the busy dual-carriageway of the Uxbridge Road, though when originally built this was the semi-rural High Street of Hayes End (see photo from the 1920s). Inside, it's divided into two halves with no internal connections, and each of these halves is further divided into two rooms.

The front entrance leads into the right-hand side of the pub; first into a fairly standard traditional bar area with some seating and a flatscreen, and then through another door into a back room which doubles as a bookable function room. This back room has leather banquette seating around the walls, a small stage area in one corner, and a door leading out to the car park.

The side and corner entrances lead into the sportier left-hand side of the pub; the front room here houses a flatscreen, a dartboard, and a corner of the bar, while the back room has a pool table and another dartboard.

There's no beer garden, but there are two picnic benches around the side of the pub and two park benches out the front. There are also a couple of picnic benches under cover in the car park, but on our visit it wasn't clear whether it was OK to sit there, since this seemed also to be in use as a storage area.

Kake and bob visited on a Saturday lunchtime in September 2012. There were four real ales on, all from Fuller's: London Pride (£3.25/pint), Chiswick, HSB (£3.25/pint), and Summer Ale; Red Fox was marked as "coming soon", presumably to replace the Summer Ale as the Fuller's seasonal.

There were a few other customers in; one sitting on his own in the left-hand side, several in the front bar of the right-hand side, and a table full of pensioners enjoying their "pensioners' lunch" (see below) in the back room. Loud music was playing in the left-hand side of the pub, while the other side was music-free but full of the sounds of conversation. Service was friendly.

According to the Fuller's version of their website as of September 2012, food is served 10am-3pm Mon-Sat and 12:30pm-5pm Sun, though according to their own website they don't open until 11am, so these times may be out of date. They were serving sandwiches, panini, and things like sausage & chips on the Saturday lunchtime of our visit, and there was a sign up advertising Sunday roasts 12:30pm-4:30pm. There was also a sign advertising pensioners' lunches (with bingo) on Mondays, Thursdays, and Saturdays.

Sausage and chips (£3) photo came with onion rings as standard, and was fairly basic, with low-quality sausages, soggy chips, and onion rings made primarily from batter with a few bits of chopped onion in. bob felt he wouldn't have been happy if he'd paid more than £3 for it. Kake's panini with cheese, tomato, and ham (£3.25) photo was better, with generous quantities of all three fillings.