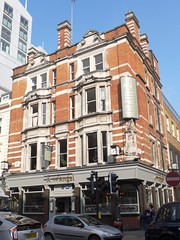 Pub near Old Street Station, on the corner of City Road and Leonard Street.

It was previously part of the Orchid Group (see earlier version of this page for an assessment as of then), but was sold to Mitchells & Butlers after Orchid's descent into administration. It reopened in early 2015 as part of Mitchells & Butlers' Castle sub-chain.

It's quite small inside, with much of the space taken up by the semicircular bar photo. The decor has been updated from its previous traditional look, with some rather over-literal angel imagery at one end photo, though the underlying features remain: exposed floorboards, banquette seating, and stools at the bar. There's at least one flatscreen. There used to be an upper bar on the first floor with a pool table and dartboard, but we're not sure whether this is still there.

Kake visited on a Tuesday morning in July 2016. I was the only customer when I arrived around 11am. Music was playing, not too loud.

Two of the four handpumps were on, offering London Pride and Sharp's Doom Bar. They also had keg taps for things including Lagunitas New DogTown, Fourpure Amber Trail, Adnams Juniper Saison, and Meantime London Lager. A half of lime and soda was 85p.

They serve food, including breakfast 10am-noon on weekdays.

They have WiFi via O2, which is free but requires registration.

Accessibility: Only a very tiny step at the entrance, but the toilets are in the basement down a narrow winding staircase with a slightly wobbly handrail on one side; there are two heavy doors to get through as well.