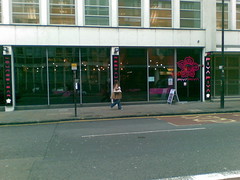 Anakana was a Thai restaurant near Old Street Station. It has now closed. According to Google Street View, by July 2012 half of the space had been taken over by the Pret A Manger next door, and the other half had become a cafe/bar called Salvation Jane.

Don't be surprised if the outside looks like it's a bar called Piya Piya; they are the same place.

At lunchtimes there's an all you can eat buffet for about £8 (as of June 2007). Limited selection but quite tasty. There were extra chillies.

They also have a normal menu; the fried squid and pad thai were very good quality.

Stig says: The deep-fried corn cake starters were excellent, and the duck was also very good. The coconut rice, however, was expensive and not very nice. Instead of rice with coconut milk, it was fried rice with large, tasteless slices of coconut; not recommended at all.