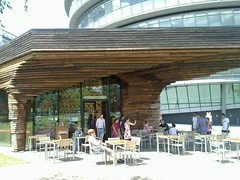 There used to be a small chain of these, but as of March 2010 there are just three of them, all in SE1.

This is really a kiosk but there is some seating inside and outside. They sell some salads, flatbread sandwiches and a poor choice of prepackaged cakes. There may be free wifi but we haven't confirmed this.

secretlondon has been here a few times, mainly for takeaway coffee. The coffee is passable but not amazing. The flatbread sandwiches are okay and the cakes poor.

secretlondon's verdict: It's not the best choice for food in the area in my opinion.

They do three sizes of coffee but the both the large and medium have two shots. This means that the large is just weaker than the medium, unless you pay for a third shot.