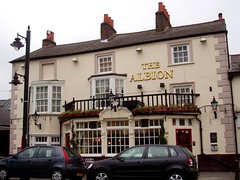 It's quite small inside, low-ceilinged and cluttered with furniture, pillars, and room dividers. A bare-floored area directly in front of the bar has tall tables and chairs, and cosier areas are tucked away to each side, including a comfortably-padded banquette in the curve of a bay window. In general, it feels a lot more individual than the average Ember Inn.

Kake first visited on a Tuesday afternoon in September 2011. There were a few people in, but plenty of free tables as most people were clustered around the bar or sitting out the front. Music was playing, a bit of an odd mix swinging from Mica Paris to Katy Perry. Three of the four handpumps were on, offering Ringwood Best (a special offer of £1/pint), Nethergate Essex Border (£1.50/half), and London Pride; the other one was clipped for Young's Bitter, but turned round to indicate it was off.

Kake visited again on a Thursday afternoon in September 2015. There were about a dozen people in when I arrived around 2:30pm, which was enough to make the place feel about half-full. No music was playing, and there was a pleasant buzz of conversation.

They'd added four more handpumps since my previous visit, for a total of eight; today, these were offering six real ales and one cider: Glamorgan My Darlin' Lemontime, Marstons New World, Hopback Summer Lightning, Fuller's London Pride, Brakspear Bitter, Deuchars IPA, and Old Rosie. The other handpump had a turned-around clip for Haresfoot Wild Boy. A half of lime and soda was 50p.

According to the Ember Inns website as of September 2015, food is served all day until 10pm, from a chain-wide menu.

There's free WiFi via O2, which requires you to give them a mobile number for them to text an activation code.

According to a sign seen in September 2015, there are quizzes on Tuesdays and Sundays from 8pm.

Accessibility: One of the entrances is step-free. From there, the bar and some of the seating is on the same level, and a ramp leads to more seating and the toilets, including a RADAR-locked accessible one (the accessible toilet and the ladies' are on the level from here, but the gents' has a step). A third seating area, to the right of the bar, is up a step.