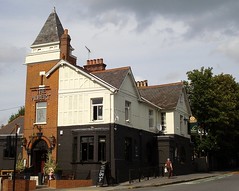 It's one of their gastro conversions, with a dedicated dining area laid with cutlery and wineglasses in addition to a number of drinking areas photo of one of the drinking sections. There's also a reasonable amount of outside seating.

Northern Steve visited in November 2008. The ales on were Tribute (£3.10/pint), Young's Bitter, Young's Special (£3.05/pint) and Bombardier. I tried both the Tribute and the Special and neither was all that impressive.

Kake, bob, and Richard visited again on a Monday afternoon in August 2009. Ales available were the same as above except the Tribute had been replaced by Kew Gold. We tried the Special and Ordinary and both were fine if nothing special. Music was playing, but fairly quietly.

According to a board seen outside in August 2009, food is served all day from noon. In November 2008, Northern Steve tried the steak sandwich (£6.50) which was 'artsy' (i.e. they only gave you the bottom bit of bread) and was so-so taste wise.

Accessibility: There are at least three entrances. One has several steps. Another has level access into the dining area and to the bar, but you'd need to go down a step or two to get to the toilets. Yet another entrance (from the carpark) gives level access to a lower seating area as well as an accessible toilet, but we aren't sure if there's a bar on that level.