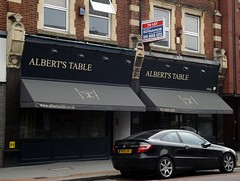 Albert's Table was a modern British restaurant in Croydon. It closed down without warning in Autumn 2017, and as of early December 2017 there are signs in the windows indicating that a bar and grill called Obia will be opening in its place.

It has two rooms, each seating around 25-30 people with a mix of banquettes and freestanding tables. Decor is subdued, recessed spotlights sit in the ceiling, and white tablecloths cover the tables.

Kake and bob visited on a Tuesday evening in October 2013. We were among the first customers of the evening, but by 8pm the place was fairly full (though there were still some free tables). Piano music was playing quietly.

Glasses of tap water arrived swiftly on request, along with a small chilled jug of water for refills. Amuse-bouches were presented on a black slate photo — cheese gougères and florets of purple broccoli dressed with olive oil, white wine vinegar, cumin, and sesame seeds.

bob started with the escabeche of Cornish mackerel with poached quail eggs, beetroot, and basil photo. The flesh of the mackerel was cooked just right; soft and still a little fatty but not cloying.

Kake's parfait of Gressingham duck liver with jardin d'hiver jelly, confit duck leg, and smoked duck breast looked good in its large glass bowl photo but proved rather tricky to actually extract from the bowl. The parfait itself was beautifully smooth, and the crunchy salad leaves provided a good contrast. The portion was perhaps a little too large for a starter though.

bob's main course was the loin of dry aged beef with an "onion & parsley trencher crisp" and a red wine sauce (£5 supplement) photo; the creamed potatoes usually supplied with this were substituted with boiled potatoes photo due to bob's lactose intolerance.

Kake's pan-fried sea bass with chargrilled potato, wilted spinach, and Dorset clams photo had a rather salty skin on the fish, but was otherwise tasty. The clams, sea bass, and crunchy-in-a-good-way diced carrots gave a good range of textures too.

None of the desserts on the menu were bob-friendly, but they offered to make a fruit salad photo instead. Kake had the chocolate pudding with chocolate & bourbon sauce, bitter chocolate wafer, and pistachio ice cream photo, which was OK but not quite as chocolatey as Kake had hoped.

Service was fine, and they were very helpful re bob's lactose allergy — the chef marked up a menu showing what was and wasn't suitable photo, and they were happy to concoct a lactose-free dessert as noted above.

Pricing was by number of courses, with three courses normally costing £34.50; however, they had a special offer on the night of our visit and so we were only charged £28. A 12.5% service charge was added to the bill.

Kake's verdict: I'd happily come back, though I'd skip dessert next time (to be fair, I usually do, since I don't generally enjoy it as much as savoury food).

Accessibility: A small step to get in (about an inch). There's a wide aisle from the entrance to the tables. There's an accessible toilet (and a gents' toilet) on the same level. The ladies' is down a flight of stairs with a handrail on one side most of the way down, and has spacious cubicles with doors that open out.