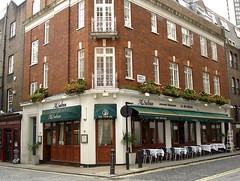 Al Sultan is a medium-sized Lebanese restaurant near Shepherds Market in Mayfair, not far from Green Park Station. Tables are reasonably well-spaced, and when Juliet and friends went there on a Monday night it was about half-full.

There are three basic categories of food: cold starters, hot starters, and grills. None of the main course options are vegetarian, but this doesn't matter as it's far more enjoyable just to order a whole raft of starters, ideally shared between several people (which is what we mostly did, although apparently those who had grilled meat as main course said it was extremely good).

The starters are all very good indeed, and portions are fairly generous. There's plenty of veggie/vegan choice in the starters. Dishes cost around a fiver, though, so it's not cheap. The house wine was entirely drinkable, as well. We didn't have dessert as everyone was full; we did however have coffee, and rather nice mint tea, and little Lebanese petits-fours type things were served with this (apparently very tasty but quite sweet). Not sure what the final bill was as I wasn't paying...