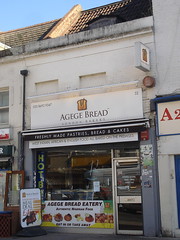 Nigerian bakery and takeaway in Deptford.

They specialise in agege bread, which is a soft, sweet, white loaf. However, they also sell Nigerian and West Indian snacks and meals to take away.

In October 2014, Kake tried the akara (deep-fried bean-based savoury doughnuts/dumplings, 3 for £1) and the moi moi in leaf (steamed bean-based savoury pudding, £1.50/piece). The akara had a decent flavour, but were a little too greasy. The moi moi also had good flavour, some of it coming from the leaf it was steamed in, and the texture was soft and even. I would have preferred it to have some of the traditional fillings, such as fish, chicken, or boiled eggs, but leaving out the fillings is a perfectly reasonable choice, and at least it kept the price down.

In November 2014, I tried the egusi stew with mixed meat (£3) photo. This came frozen, which was handy for me at the time, but they're happy to heat it up for you. Also handy was being able to buy it without an accompaniment such as pounded yam, since I had some at home already (though this is available too at an extra cost). It was less oily than I've had elsewhere, with no strong flavour of palm oil. However, the flavour was still deeply savoury, without being overly salty. The tripe wasn't taken from the best part of the stomach chamber (no strong hexagonal ridges), but it was properly cooked, neither too chewy nor overly soft. There were plenty of greens included in the mix.

Accessibility: No steps to get in. Seating is limited, and all on high stools.