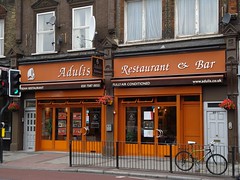 Eritrean restaurant on Brixton Road, quite close to Oval Station. According to the Lonely Planet message boards, it's been there since at least 1997.

Kake, secretlondon, bob, and ilmari visited on a Friday evening in August 2008, arriving around 8:30pm. We hadn't booked, but there were several tables available so we were seated straight away (the place filled up later on).

We decided to share the Adulis combination for four (£48.95), which includes eight dishes of the chef's choice, plus injera (fermented pancake-like flatbread) or rice. They also do combos for one or for two, and additional people can be added to the four-person combo at an extra £9/head. The combos are available in both vegetarian and omnivore versions.

We chose to have the omnivorous version, with injera; seven of the dishes were served on the injera photo, and the final one, a fried lamb dish, came in a separate little pot with charcoal burning in the bottom to keep it warm photo. We also got a couple of baskets of injera on the side, included in the combo price (you can keep asking for more if you run out).

The selection had a decent range of spiciness, from the very mild spinach dish to the pleasingly warming chicken/boiled egg one. The food was all fine, with the only real disappointment being the spinach, which had a slimy texture reminiscent of the tinned version of the vegetable.

We accompanied our food with a couple of bottles of dry Mies (£12) — a smoky Eritrean honey wine — and finished off with the ceremonial coffee (£9); beans freshly roasted and left briefly on the table for us to enjoy the aroma, then ground and brewed in a traditional vessel, and served with popcorn and incense. We were given a number of brewings of the beans, but they were quite busy by this point of the evening, so we did have to stop someone and ask for each one.

The final bill was £23/head, including service.

Kake's verdict: I think I preferred the food at Muna's. Although it was fine here, none of it was really outstandingly delicious; and although the per-head food price at Muna's was higher, we got a lot more food, meaning that with a doggybag for the next day's lunch it worked out to almost the same cost. However, the atmosphere here was more lively, plus the honey wine was great. I might come back, but I think I'd rather order a la carte next time.