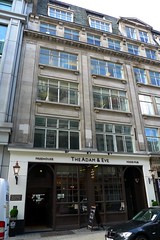 A pub just off Oxford Street in Fitzrovia, which opened in mid-September 2009, replacing Ben Crouch's Tavern, an Eerie pub on this site.

There's been a fairly major overhaul to this space, removing all the old cobwebs and gothic-themed paraphernalia to bring in a bright, clean new space, with carpets, wooden tables and understated decorative flourishes. It's still on several different levels, with large tables in alcoves, and more seating up a few steps at the back, but it's a lot more brightly-lit. On an after-work visit in October 2011, the music was pitched quite loud, and only rose in volume as the pub got busier, which made conversation difficult.

There are four handpulls at the bar, with Sambrook's Wandle, Adnam's Bitter and Hog's Back TEA, as well as Doom Bar advertised on the other in October 2009; on a visit two years later, the only two ales were Adnam's Bitter and Young's Gold (£3.50/pint). Draught lagers include Franziskaner, Beck's Vier, Staropramen and Bitburger. They have Gaymer's cider on draught, and more bottles behind, as well as a good sized wine list.

A staff service area sits to the side of the bar, and the staff offer table service to diners at lunchtime, though it still functions as a regular pub if you just want a drink. The food itself is from a fairly short menu photo of menu in September 2009, stressing pub classics (burgers, salads and the like), and there's a special offer on sharing platters of sandwiches. Ewan's goat's cheese, sweet potato & onion tart was from the starter menu (£6.50) photo and came with a small leafy salad, so the extra order of green leaf salad on the side (£3) was probably a mistake. However, the tart was fine. Chips (£2.75, offered as thin- or thick-cut) were also reasonable, and the house burger (£9.50) photo, served on a sturdy wooden board with some very chunky wedges, was judged to be quite good by Sarah.

Ewan's verdict: If the place seems a bit airport-lounge bland (Geronimo rather specialise in this market), it does at least have friendly staff and a better range of drinks and food than in its old incarnation, and offers a pleasant respite from Oxford Street's brusqueness.

Accessibility: No step to get in, and there's a RADAR-locked accessible toilet on the ground floor. Some of the ground-floor seating is up a couple of steps on a dais. Other toilets are down a flight of stairs with a couple of bends and a handrail on one side most (but not all) of the way down.