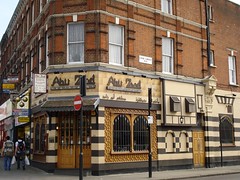 Syrian restaurant in Shepherd's Bush. As of mid-2009, they also have another branch on the Edgware Road.

Kake visited on a Thursday lunchtime in April 2009. There were about half a dozen other customers during my visit, but there was no problem finding me a table by the window (they have quite a few window tables). Arabic music was playing, but not too loudly.

The menu includes both meze and main courses, but I just had a selection of meze. I took advantage of their "three cold meze for £5" offer, choosing hummous, Arabic salad, and broad beans with yoghurt/cucumber sauce. I also had a separate portion of falafel (£2.75) and a lemon juice with mint (£1.95). They brought me two pieces of flatbread with my meal; since I hadn't asked for these, and only needed one of them, I was a bit surprised to see them turn up on the bill at 30p each.

The hummous was very smooth, with an evident tahini flavour; it's not the best I've ever had, but it was fine (note: I am very fussy about hummous). The falafel and broad beans were also fine. The Arabic salad was a bit boring, but certainly refreshing; iceberg lettuce, cucumber, and tomato in a very subtle dressing. The lemon juice with mint was very green; the mint was all blended up in it. It didn't have a very exciting level of flavour, but it did the job.

Service was OK, but there was quite a bit of hanging around trying to get the bill at the end, while staff members stood about chatting at the other end of the restaurant.

I'd like to come back with more people, to try a greater variety of dishes and also to give the grilled meat a go — meze isn't an ideal thing to try on your own, after all. I think I'd have enjoyed my meal more if there had been some kind of taster platter available.

Accessibility: Two steps up to get in. Didn't check the toilets.