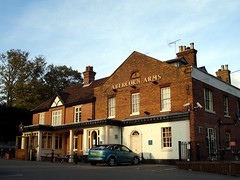 The Abercorn Arms was a pub in Stanmore. According to the August/September 2010 issue of London Drinker, it closed in early 2010 for "substantial rebuilding and extension". It reopened under a different name but as of mid-2016 it's now an Indian restaurant and bar called Everest Abercorn.

Kake visited on a Tuesday afternoon in October 2008. The only real ale available seemed to be Ruddles County (£1.50/half) - it came up on the till as "guest ale", so it might change about a bit.

There were a few other people in when I arrived a little after 3pm, some just finishing lunch. Piped music (and adverts) came courtesy of some radio station or other, and it was all a bit cheesy - "Are You Ready For Love", "I Know Him So Well", "2 Become 1", etc.

As well as a normal pub-style area at the front, there's also a more formal dining area at the back, though it seems that the same food is available wherever you choose to sit. The pub area has a number of sofas. There's also some picnic bench seating outside; not sure if any of it is covered.

Food is served noon-11:15pm every day. It's Indian-style, and it looks quite interesting (see link below for full menu). They even have a few Indo-Chinese dishes on the menu. They also offer takeaway.

I'd like to come back and try the food, though I'm a little put off by their apparent taste in music.

Accessibility: Step-free to get in, but toilets are up a flight of stairs.