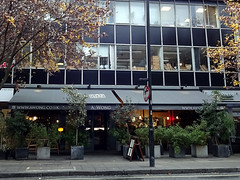 It's a small space, with tables to suit groups of two or four. There are also half a dozen or so seats on high stools at the bar, and more tables out the front in an area screened off from the pavement with plants. A semi-open kitchen offers a view onto the chefs' work.

Unusually — but in a good way — the dim sum dishes are ordered by the single piece, rather than by threes or fours as is traditional. This makes it easier to cater for any size of party, particularly those with a mix of vegetarian and omnivore, while also making a solo dim sum lunch possible.

Kake and friends visited on a Thursday lunchtime in early December 2015. We'd booked in advance, and had been warned that they'd only be able to hold the table for 15 minutes, which was quite understandable given the small size of the restaurant and the amount of foot traffic in the area. Although there were free tables when we arrived around 12:15pm, these filled up quickly, as did the seats at the bar. No music was playing, but the hard surfaces of the decor meant that the sounds of conversation escalated to the point where it wasn't always easy for us to hear each other speaking.

We ordered a fair selection of the dim sum and "snacks" (小吃/xiaochi/small eats), and ended up spending around £20/head for a reasonable amount of food.

Presentation was generally good, with special mention required for the mushroom and truffle steamed bun (松露香菇包; £2 each); not only shaped like a mushroom cap, but also dusted with brown powder and presented on a little square of astroturf to complete the illusion.

Chengdu street tofu with soy sauce, chilli, peanuts, and preserved vegetables (成都豆腐花; £3.50) photo of one order was a small portion, but very well-executed, with a good balance between ingredients, and served at just the right temperature.

Quail egg croquette puffs (黄金鷓鴣蛋; £1.75 each) photo of four orders were also well-executed; the yolks of the quail eggs were still runny, and the accompanying ginger/spring onion sauce gave a good contrast to the crispy but somewhat bland croquette coating. Egg-related competence was evident in the steamed custard bun (£2.50 each) too, with a nicely runny but not overly-thin vanilla-scented custard filling.

Sticky rice rolls with crispy doughsticks (粢飯; £3) photo of one order were good; the rice was cooked well, and the doughsticks were still crispy. The foam on top didn't really add anything flavour-wise, but looked pretty.

Pickled cucumber (醃黃瓜; £2.50) photo of one order showed some very precise knifework, and the flavour was good too, with black vinegar prominent in the dressing but not overly harsh.

Yunnan style fried cheese with Sichuan pepper and salt (椒盐乳饼; £2) photo of one order and Shaanxi honeycomb oat noodles (莜面栲栳栳; £4.50) photo of one order were both examples of dishes one might struggle to find elsewhere in London. The fried cheese was a little like halloumi, and the pepper and salt dip went with it very well. The noodles had an evident oat flavour and an interesting, slightly rough texture; they were bland alone, but transformed once dipped into the accompanying coriander-based sauce.

Chinese chive potstickers (韭菜餃子; £1.50 each) photo of four orders were fine, and usefully vegetarian. Mushroom, bamboo, and vermicelli spring roll (春卷; £2 each) was also fine, without being particuarly interesting or outstanding. Pork and prawn dumplings (燒賣/shu mai; £1.30 each) photo of three orders were again fine; the pork crackling on top didn't add much to the experience, but the dumplings themselves used good quality meat and were neither too fatty nor too dry.

Smoked duck and jellyfish salad (涼拌海蜇; £6) photo of one order was another dish to feature pork crackling. The smoked duck flavour went very well with the crisply-textured jellyfish, though the vinegar in the dressing was perhaps a little too prominent.

Scallop puff three ways (带子酥; £2 each) photo of three ordersdidn't entirely work for us; the outside of the puff was quite substantial, making the piece as a whole rather too stodgy. The lightly cured scallops in the accompanying dip were a good touch though. The third "way" wasn't immediately obvious but might have been the accompanying melt-in-the-mouth powder, which was interesting but not enormously flavourful.

Portion size was a little confusing for the non-dumpling dishes. The French bean fritters were more than enough to split between four, while the crab cannelloni was only enough for two and the Chengdu street tofu barely enough for one. The spring roll was a single roll, and hence difficult to share, but also large enough that if eaten by one person alone it would have dominated the meal.

Although tea was priced at a relatively steep £3/person, there was no tea menu, with choices being described by the waitstaff simply as "jasmine tea, green tea, oolong..." The oolong wasn't bad, remaining drinkable and non-bitter over an hour of brewing. One nice touch was the provision of a small bowl of goji berries to sweeten the tea if required.

Service was fine overall, though rather variable, with some staff members appearing significantly more experienced than others. At times there was rather more intrusion into personal space than might have been expected. The first person we asked about vegetarian options was both under-informed and seemingly unwilling to pass the question on to a more knowledgeable colleague, but the maitre d' saw there was a problem and came over to provide all the information we needed.

One surprising aspect was the rather rough and splintery disposable bamboo chopsticks provided — rather a contrast to the thick linen napkins and general air of aiming for the upmarket.

Kake's verdict: I'd very much like to come back and try more of the menu, and there are several dishes we ordered today that I'd happily order again. I just wish the designer of the space had paid more attention to minimising noise.

Accessibility: No steps to get in, and step-free to the toilets too. However, the entrance doors are extremely stiff and heavy, and the doors to the toilets are fairly stiff too. The cubicles in the ladies' are very small, in one case to the point where the door only opens halfway because the toilet itself blocks it from opening any further.