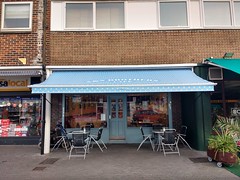 The decor is a step up from a greasy spoon, with a wooden floor and freestanding tables and chairs photo. It seats around 40 inside, and another 8 outside under a canopy photo.

bob visited on a Saturday lunchtime in December 2016. There were three other customers when I arrived around 1:30pm. No music was playing.

I had set breakfast 2 with an extra egg (£5.20 plus 75p for the extra egg) photo. The eggs were perfectly cooked, with a runny yolk and firm whites. The black pudding was also very good; crispy on the outside but soft in the middle. The sausage and tomatoes were fine, and the fried slice was good. The bacon was crispy in places.

bob's verdict: A decent enough breakfast; I'd go back.

Accessibility: A step to get in, and another step to the toilet.