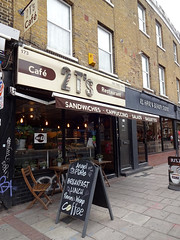 It's quite small, with just five tables inside that seat 2-4 people each and a couple more on the pavement outside, under a awning but facing a busy road. The walls are brickwork painted grey and red, hung with black-and-white pictures.

Bec visited in February 2008 and had the veggie set breakfast (£3.90 including coffee or tea), which consisted of two hashbrowns, mushrooms, toast (only one slice, rather mean I thought), beans, scrambled egg, and tomatoes (tinned). It was tasty and cheap, though I do think toast should be two slices. I replaced my mushrooms with extra tomatoes, but I wish I'd asked for chips instead. Oh well. Live and learn.

When Kake visited on a Tuesday morning in October 2019, there was only one free table at 9:15am, but it emptied out fairly quickly after that. Music and adverts were playing on the radio, not too loud.

Eggs spinach (£6.45) photo was essentially eggs florentine (the naming might be because they have a dish on the menu called "eggs florentino" which includes bacon as well as spinach). The yolks of the eggs were disappointingly not runny, though not quite solid; their hemispherical shape suggested microwaving. The spinach was fine, and there was plenty of it. Muffin and hollandaise were also fine.

It came with an unexpected side salad of lettuce, coleslaw, tomato, sundried tomato, cucumber, gherkin, and pickled beetroot. The salad was fresh and carefully prepared — they'd even decorated the cucumber slices by peeling off strips of the skin.

Kake's verdict: I wouldn't order a poached-egg dish here again, but I'd come back if I was in the area. I'd like to try their Turkish breakfast.

Accessibility: A step to get in, and the seats are fixed to the tables. Toilet not checked.