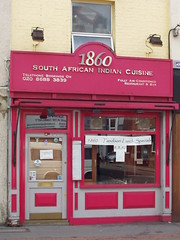 Now closed; was a South African Indian restaurant in Croydon. As of August 2012 the premises form part of Croydon Metropolitan College.

bob and elvum visited in December 2006. The chilli bites weren't really hot enough for bob's taste. The chicken samosas were very good and meaty, though the sauce was a bit acidic. The bunny chow was quite good.