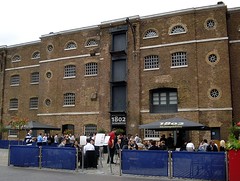 1802 was a bar/restaurant attached to the Museum of London Docklands, situated in a converted warehouse. It has now closed. As of late 2011 the premises are occupied by another bar/restaurant called Rum & Sugar.

The information below is retained for people who want to know what it was like as 1802.

Situated on the end of a row of identikit bars in Docklands, just along from West India Quay Station, 1802 is the bar/restaurant attached to the Museum of London Docklands. It's in a converted warehouse, and really is quite cavernous inside. There's plenty of outside seating too. Inside, there's standing room near the bar plus a couple of (rather nice) big sofas. Tables and upright chairs are spread out quite widely-spaced across the room.

Kake and doop visited on a Wednesday evening in June 2008, on the strength of a couple of excellent reviews on the Cook Sister and Edible London blogs (linked below). Unfortunately we had failed to note that both reviewers had visited at lunchtime only.

Kake arrived first, and was served a double gin and tonic made with flat, warm tonic from an open bottle along with a huge quantity of ice, which swiftly melted (£5.45). Change was provided on a silver tray with one of the pound coins unnecessarily split into two fifty-pence pieces; a blatant solicitation for a tip, which I ignored (although the staff member who served me was friendly, this practice is really rather cheeky, plus it's not like she was providing table service).

When doop arrived, and noted that the music was so loud that the table was vibrating, we decided to cut our losses and go elsewhere. I didn't even bother to finish my flat, dilute G&T.

Will probably visit again some lunchtime to see if it's any better then.