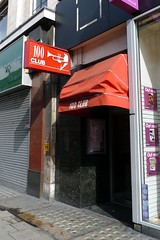 A venerable and well-regarded rock venue in a basement underneath Oxford Street, around halfway between Oxford Circus and Tottenham Court Road stations.

The venue itself originally opened in the 1940s as a jazz club, but since the 1960s has been devoted to rock and rhythm & blues music, still attracting some big names from time to time and in general putting on a good selection of music. It was threatened with closure in 2010, but saved via a sponsorship deal a few months later.

The space itself is a long room, with the stage area opposite the doors, toilets off to the left side and the bar, split into two sections, to the right. Before reaching the main space, there's a box office area halfway down the stairs after doors open (usually around 7:30pm-8pm).

The bar itself has a couple of handpulls for real ale, featuring Flowers bitter and IPA on a July 2009 visit. They also offer keg Bass ale, some premium lagers such as Staropramen and Beck's Vier, and a few other more basic lagers too, such as Castlemaine XXXX. Gaymers Olde English cider is on draught.

It's a fine venue, with pretty decent sound, though it hasn't been unduly refurbished over the years, so still retains a lot of crumbling, musty charm to it.