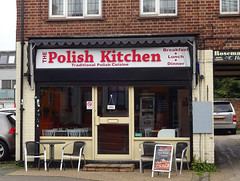 The Polish Kitchen was a Polish restaurant in Cheshunt. It has now closed. As of early 2019 the premises are occupied by a pizza and pasta restaurant called Zio's.

It's small and cosy, with cheerful orange and yellow painted walls, and plants in colourful pots filling the ledges among the walls. A chandelier-style light fitting hangs in the centre of the ceiling, with strands of ivy growing along guidelines towards it from the corners of the room. Light grey chairs and tables seat just 22 people, while a couple of small tables on the pavement outside offer space for four more.

Kake visited on a Thursday lunchtime in November 2017. I was the only customer when I arrived around 12:15pm, though a couple more came in for takeaway zapiekanki ("Polish pizza" made on baguette halves) while I was there. A flatscreen in the corner of the room was showing BBC World News with the sound off. No music was playing when I arrived, but they put some on shortly afterwards.

I went for the pierogi z kapusta i grzybami (dumplings with cabbage and mushrooms; £8 for 10) photo. I was offered the choice of butter or pork fat (smalec) to go on top, and chose the latter; this turned out to include small, light, crispy bits of deep-fried meat, which worked very well.

The pierogi themselves were cooked just right, with a little bite left in the dough. The filling was finely shredded and well flavoured, with a good proportion of filling to wrapper. The portion was quite large, and I did wonder if it would get a bit samey by the end, but they were tasty enough that I never got bored. (They do offer half-and-half on dumpling fillings if you're worried, though, with three to choose from.)

Service was friendly and helpful. No service charge was added to the bill, but there was a tip jar by the till.

Kake's verdict: I'd happily come back if I was in the area. These were the best pierogi I'd had for a while.

Accessibility: Two steps to get in. Another step to the toilet (a single unisex cubicle).