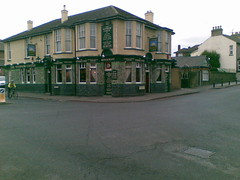 Good Beer Guide pub in Carshalton. Previously owned by Punch Taverns, it was purchased by Shepherd Neame in mid-2009.