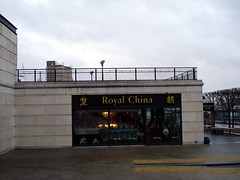 There's seating outside, which is very popular during the summer. Service can seem a smidge slow if you're sitting outside, but if you're sitting underneath one of the trees on a summer's day, you probably won't mind. However, it can become very busy at lunchtimes at any time of the year, and booking in advance is advisable. It took about half an hour of waiting before they were able to seat a party of 14, around 1pm on a weekday in May 2008.