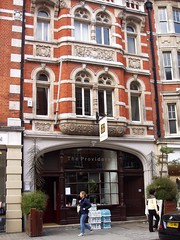 To close, "the Tapa cheese plate of Montgomerys Cheddar, Tunworth and Picos de Europa cheeses with oatcakes, fig anise bread and stone fruit chutney" (£8) was truly lovely, with the oatcakes being particularly good (crumbly and crunchy at just the right texture) though the fig bread was excellent, and all the cheeses very well chosen (a cheddar, a blue cheese, and a brie).