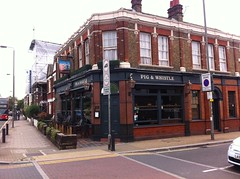 Pub in Southfields, in the Good Beer Guide.