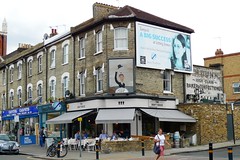 BrewDog pub on Northcote Road in Battersea/Clapham. It was previously known as the Draft House Northcote, having replaced a Pitcher & Piano bar in October 2009. However, the Draft House chain was taken over by BrewDog in March 2018, and despite an initial statement that the Draft House name would be kept, by April 2021 this one had been renamed to the Northcote Arms.

Like the other Draft House branches, they serve real ales as well as other interesting beers from around the world, and the draft beers are available in thirds as well as halves and pints. They have handled jugs as well as straight glasses.