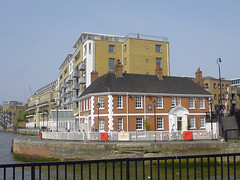 It serves traditional British food in its restaurant, but also serves bar food for those who haven't reserved in advance, such as home made sausage rolls with brown sauce, pints of prawns, and other traditional pub food.

Last visited by [peshwengi]?, some time in the first half of 2007. Opening hours taken from Time Out website, April 2008.

Comment added by Kake: Visited with Ewan tonight. Adnams Regatta was £2.80/pint; Deuchars IPA also on, one other handpump with no clip which we suspect usually has Pride.