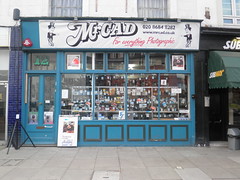 Previously in Croydon, it moved to Victoria in May 2013. The comments below relate to the Croydon store, but it's likely to be very similar in its new home.

Mr Cad is full of camera equipment, stacked high, film and pro gear and other stuff. It's about as far away from Currys as you can get!

It is also cheap and unpretentious, and was staffed by people who secretlondon reckoned had worked there for about 30 years. In 2004 she went on a trip to Croydon especially, and fell in love with it. secretlondon got her Holga there for £30, when fashionable shops in Islington were charging £70.