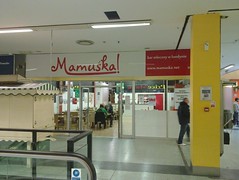 This is an attempt to recreate a bar mleczny, a Polish communist era self service canteen, on the first floor of Elephant and Castle shopping centre. It is in a former bed shop with a bare concrete ceiling and painted breeze block walls. The tables are communal and mismatching. You pay at the counter and are given a receipt with a number on the bottom. Your number is called when your meal is ready and you go and collect it from the counter.

As of February 2010, all the meals are £5, with £3 for desserts and £1 for drinks. They also sell vodka at freezer, fridge and room temperatures.

secretlondon visited one weekday evening in February 2010. I had Placki ziemniaczane (potato pancakes) which came with a choice of goulash, mushroom sauce or sour cream & sugar. I had mine with goulash photo. I also had a glass of kompot (£1) and a portion of baked cheesecake photo.

The food was interesting and I would like to go back and try more. I don't get all the references — my cheesecake had an outline of a spoon and chain made in the chocolate. According to the SE1 forum this is a reference to this satire.